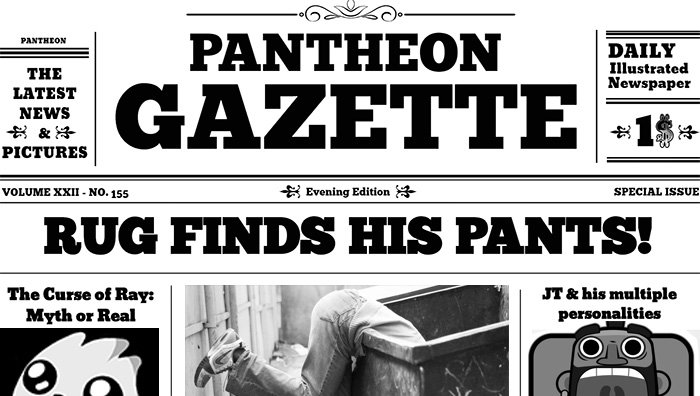 Just for a little fun, a handful of some of the creative folks in Pantheon decided to start a sort of publication, which has been dubbed the Pantheon Gazette.  I figured I’d share their most recent work, “The curse of Ray: myth or real”.

For those not in Pantheon, a little backstory… it is believed that if Ray spectates your game, you losing the match is a certainty. Hence, “The curse of Ray”.

The Curse of Ray: Myth or Real

Lazing on a Sunday afternoon in the Pantheon Lounge™, I overheard someone talking about The Curse of Ray. Intrigued about the belief in curses in the 20th century, we at Pantheon Gazette have decided to investigate this matter. We sent our hard working reporters to every corner of Pantheon to ask everyone the same question: “Do you think the curse exists? And can you give us an example of how it affected your game?”. The response we received was bone-chilling 😱

If you see goblin fire, just throw away your phone
Note: has ignored to answer further queries in fear of the curse and ran away

Rug, the pantsless warrior of Ares

Does it exist? *takes a sip of beer* …  Hell yeah it exists. One time when I was up 2 crowns to none, Ray popped on, threw a hog scream and I got out cycled by a golem, pekka, mega knight, lava hound deck and was immediately 3 crowned.  If you see that little blue 1 followed by a lit goblin just close the app… unless you wanna tilt 500 trophies, get a cardboard cut in the webbings of your fingers, and stub your pinky toe on a coffee table all at the same time.  Don’t say I didn’t warn ya.

Camnwat, the crayon genius of Atlas

Yes, it exist and I never got to 6300 in my life til ray stepped away due to moving to Australia then I got it easy…. now that he is back I have never returned -_-

Yes, I believe it does exist.

Being friends with Ray is stressful. You see the little blue ‘1’ pop up and it doesn’t matter if you have taken both princess towers down and have 1HP on the king tower. You WILL lose

“He (Ray) is bad man, he has caused good man Camnwat to tilt”

Believes in the curse and made sure he doesn’t have Ray on his friend list.

Note: after the interview, went on a weird rant about disbanding the Pantheon Gazette

Logic, the logician of Hecate

Yes, i believe it exists

DMG, the all knowing guru of Thanatos

The Ray curse is definitely real, as soon as you see the fire goblin emote it’s time to exit the game.

I’ve lost on ladder and also a couple of final war games in clan wars due to Ray’s spectating, but I haven’t had it as bad as some people. The worst part is Ray knows the curse is real and I have rarely ever been able to watch him play and return the favour. 🙁

i have held out this long

i believe in the curse

and I avoid ray out of fear

Note: each line was spoken was by a different personality

Yes, it definitely does. Just this season, the curse has made me lose so much on ladder that I have needed to switch to 2.9 just so I have a chance at winning.

Oh, and he also made my ebarbs heal deck stop working in the log challenge

In the beginning of the curse it felt really real. I would see that little blue dot pop up and bam it was like I could play right. See a hog emote, and just shook my head. Now days I feel Ray has been lenient on me and mow allows me to win about 2/3 of the time. I’m just thankful for his distain for Cam and the one they call Artic !!!! Thank you guys and I would say if the curse begins on you, do what you can to get back in Rays graces. He has a lot of time to peak into games and it will kill your PB that season. Good luck all!!!

Ryker, ruler of the moist gang

starts to have flashbacks

The curse is real. I would play ladder confidently…until I would see  a player pop up on the screen spectating. All of a sudden, I would start making mistakes that a veteran player would not make. My pekka placements would seem to be off all of a sudden after perfect performance to matches prior. I then would go to my friends list and I would one friend online…Ray. I continued to play matches and would continue to have just a lone spectator watching. I could feel him I could feel him touching my soul. I could feel my skill drop.

Once I dropped 300 trophies on a push to 5600 once and I saw Ray online. I knew he was watching. I felt him judging me. No emotes. No confetti. Just silent watching. It drove me mad!! eye starts twitching  I finally had enough. I had to do something. I couldn’t continue to drop trophies and rage. I built up the courage and I deleted him off my friends list. Since then, I haven’t suffered from the effects of the curse. I actually recently hit a pb of 6000.

I’m a free man. I enjoy my life again and can sleep well at night

Anonymous Person. Scared of all the believers of curse might hurt him

No it’s a myth. Just cause you guys cant handle a little pressure doesn’t mean someone brings a curse upon you

I always hear Cam “I cant win” crayon boy complaining about ray cursing “him”. How about you take the crayons from out your nose and learn to play something other than gs clone!

We have received a response from the mighty InfernoBlizzard of Helios but later found out they were plotting behind the scenes to get on the good side of Ray to avoid the curse. Thanks to the anonymous person who has tipped us off. Nonetheless, here is their response and their treachery.

I think Ray’s curse is full of crap. It’s just a poor excuse that someone makes when they lose—while Ray’s spectating. I feel bad for the Ray to be honest, simply from the fact that his name gets a bad connotation.

I have never been “affected from the curse” myself, I’m 16-0 with Ray spectating.

I believe the Ray “curse” separates the wheat from the chaff. The mighty excel and win great victories under his watchful and benevolent eye while the meek flounder about hopelessly.

After hours of research and with evidence from the brave people who spoke up, our top men & women have come to the conclusion that the curse is REAL!!!! 😱

Till next time stay safe & escape Ray at all costs!